April 6th, 2015
Amber’s mixed media paintings are rich in texture and highly symbolic. The sculpture works are organically assembled objects and materials and will be revealed as Maida’s newest body of work during the exhibit.  Many of the materials infused with the paintings and sculptures are from her natural surroundings such as eggshells, coffee, flowers, feathers, hands of time, and found objects such as antique skeleton keys from her Connecticut home.  Amber’s path through healing has had a tremendous impact on the creative process which involves infusing the work with meditative and positive prayer practices in hopes the paintings mirror the positivity and hope back to the viewer.  Formerly a Connecticut dance teacher and Licensed Massage Therapist, Amber incorporates her journey through the performing and healing arts in her art making.  Maida’s paintings are in public and private collections throughout the world and have been exhibited in galleries and museums internationally.  She recently moved back to Connecticut after living in Southern California for five years and is proud to be a Litchfield, CT resident.

"The 2010 body of work, “A Labyrinth Line Existence” was the first cohesive series of paintings that solely featured music by David Bowie in my studio process. The title is a quote from David Bowie’s interview on the 1993 “Black Tie White Noise” film. His music and words played repeatedly during the creation of these paintings and inspired the resulting images. Since the creation of this collection, Bowie's music and lyrics continue to be a symbolic "voice" in my work, which now collides with several other influences that together inspire me to create otherworldly realms as they echo through my studio day in, day out."

If you like David Bowie, chances are you’ll appreciate the aesthetic of the  Labyrinth solo show at the Gallery at Black Rock. The show opens with a reception for the artist, Amber Maida,  on Friday, June 4.

Anyone who went to the White Space Gallery when it was on Chapel Street in New Haven has seen her work hanging by those gorgeous Salvador Dali lithographs. Amber is now being represented by the Black Rock gallery.

The Naugatuck artist’s work has already gained recognition. Last September’s  Art World News Magazine featured her work, as did Ink Magazine the year before. A suite of her paintings were selected by Richard’s of Greenwich for the 2009 Art to the Avenue exhibition in Greenwich.  Her work has also been in juried exhibitions at AIRS in New Haven, the Housatonic Museum of Art, the Silvermine Guild of Art in New Canaan and Lazy Pear Gallery in Montpelier, VT.

Her new body of work, “A Labyrinth Line Existence,” alludes to a quote from David Bowie’s interview on the 1993 “Black Tie White Noise” film. She plays Bowie’s music often while in the studio.  “Bowie has been a strong influence on my work, which has developed into a visual vocabulary on the canvas,” Maida says.

The work is simply stunning, particularly her mixed-media paintings.

“I create tactile counter-environments that express myth and uncover the mystery hidden within reality,” Maida explains. “I juxtapose dualities — fragility/strength, ancient/contemporary, external/internal — to exploit a tension…”

“My materials are carefully chosen and strongly symbolic,” Maida continues. “My work contains recurring motifs and materials including golden labyrinths, fluid backdrops, crackled textures, vintage books, silks, feathers, eggshells, and line drawings of suspended worlds. I hope that my images take viewers deeper within their own realm of realization.”

You might see what she means, in a Flash presentation, here. My favorite is “The Passing of Time.”

::Forgotten Factories in Our Backyards
By: Michelina Docimo, March 23, '10

"Each artist brings a unique perspective of how factories have impressed upon our lives and affected our local landscape. Amber Maida, for instance, seems to combine feelings of despair and hope in her collage paintings. Using a mixed media of acrylic paints, combined with organic materials like egg shells, twigs, and sand, Maida beckons viewers to look inside and figure a way out of this maze."

FORGOTTEN FACTORIES IN OUR BACKYARDS

It’s difficult not to notice the puffs of white smoke pouring out of a smokestack skyline while driving through Bridgeport on I-95. Passing through, abandoned factories blur into the background, edges fading on the coast’s cargo docks. Confused images of production and malfunction begin to mix.

Set in the outskirts in an area of Bridgeport that used to be buzzing factory businesses, The Gallery at Black Rock is hosting Industrial Strength where it becomes difficult to distinguish art from reality. Gallery director and owner, Eileen Walsh, has always had a fascination with factories, their simple exterior structure and the complex processes occurring inside. Assembling fifteen local artists, the show has a taste of what Bridgeport used to be and makes you wonder what it could become.

Walsh recalls how in the 1980s, Bridgeport was affected by drugs taking over the city. “It was a time when no one felt safe driving through the streets. But as the 1990s came, cocaine went out of fashion, which resulted in less crime.”  Urban planning and politics helped build Bridgeport’s self-esteem and now feels on the brink of something good to happen. The stigma still remains though, not only in the residents’ minds, but in the air we breathe, the water we drink, and soil we build on.
Photographer and mechanical engineer, Jeff Becker, captures this sentiment of concern through images of cracked windows, spiraling staircases, and illuminated incinerators in the night sky. The image of a smoky red Bridgeport RESCO (a refuse incinerator and energy plant) recalls the EPA controversy in the early 90s of citizens taking action against the burning of toxic, illegal construction site materials, emitting mercury, lead, asbestos, and other pollutants into the air.

Each artist brings a unique perspective of how factories have impressed upon our lives and affected our local landscape. Amber Maida, for instance, seems to combine feelings of despair and hope in her collage paintings. Using a mixed media of acrylic paints, combined with organic materials like egg shells, twigs, and sand, Maida beckons viewers to look inside and figure a way out of this maze.

Industrial Strength provokes discussion on how these factories have affected all aspects of our lives. A show on architecture and form, it also asks for creative sustainable solutions to recover brownfields and neglected buildings to assist Bridgeport in cleaning up its image; it asks, “how can we make society work again?”
Industrial Strength is an off-site exhibition and can be viewed at 51 Crescent Avenue in Bridgeport every Saturday through March, from 12 – 4 pm. For a video coverage of the opening reception, click here.

Images on exhibit at The Gallery at Black Rock courtesy of Jeff Becker and Amber Maida, respectively. 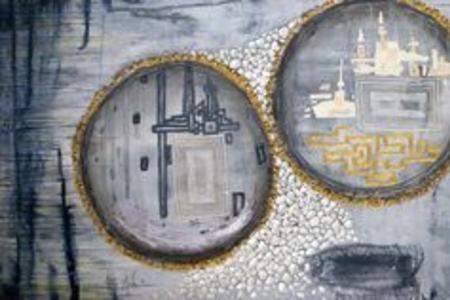 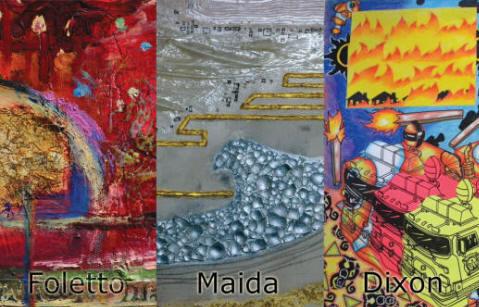 ::The Art of It: Lit From Within Litchfield artist Amber Maida's paintings are rich in texture and highly symbolic.

Serendipity gallery in Litchfield celebrates its fourth anniversary in April and is featuring contemporary mixed-media paintings and sculptures by Litchfield artist Amber Maida, through May 12, 2015. The show is titled “The Silver Lining.”

Says Serendipity’s Liliana Kleid: “Amber’s paintings are rich in texture and highly symbolic. The materials are from her natural surroundings such as eggshells, coffee, flowers, feathers, hands of time, and found objects such as antique skeleton keys from her home.” 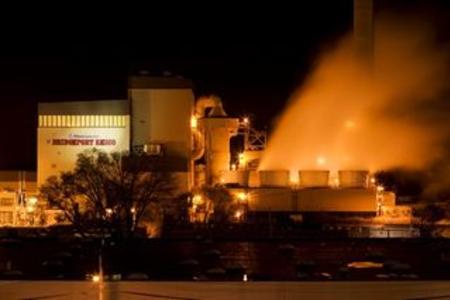